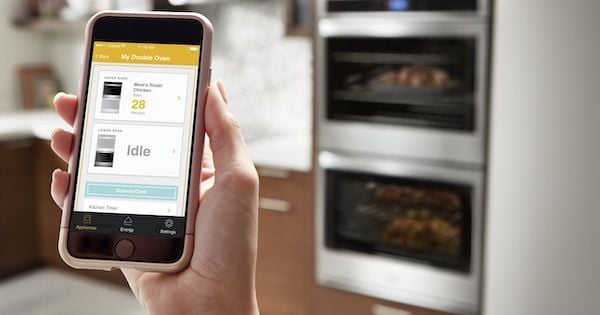 Whirlpool is over a century old and a giant in the appliance market today. Despite its age, this appliance manufacturer is constantly coming up with new innovations in consumer appliances. In 2018 it began offering Sunset Bronze appliances on the market, and they entered the smart appliance market that year as well. Learn more about the new features of Whirlpool connected appliances for 2020 below!

In 2017, Whirlpool added wifi and Amazon Alexa voice integration to 20 models. In 2018, Whirlpool connected appliances had even more to offer with Google Home integration. In 2019, they released an Apple smart watch app that allows you to do things like check on and change washing machine or dryer cycles and oven temperatures. One benefit of these multiple integration options is that you can stick with the virtual assistant and voice control systems you already prefer rather than being forced to switch over to a new one in order to use your smart appliances.

What's Whirlpool Been Up To?

Whirlpool is joining the unofficial competition for "largest touch screen on an appliance" with their Connected Hub Wall Oven, which is still just a concept (not released or for sale yet) at the time of this writing and was initially shown off in January 2019 at the Consumer Electronics Show. This is an expansion on their smart wall oven offering: this hub features a 27-inch touchscreen on the oven door. It uses augmented reality to show you how to cook after it's scanned the interior - for example, where to place the built-in temperature probe in a roast chicken - and helps guide you through different recipes. You can even "zoom in" on your food while it's cooking inside without opening the oven door and wasting the heat.

On top of being a cookbook and cooking assistant, this wall oven will hopefully also help you coordinate multiple recipes, suggest meals based on time available for dinner, and show family members' calendars. Now that the GE Kitchen Hub is on the market, it looks like Whirlpool is looking for a touchscreen smart appliance of its own. As of this writing, there's no news on when this wall oven will be in production or what it will be priced at. Fingers crossed!

Below is a short concept video from the WLabs Facebook page (WLabs is Whirlpool's "innovation incubator" that is developing and testing the wall oven hub concept and plenty of other things).

Whirlpool's new lines of smart ranges and wall ovens are integrated with the Yummly recipe app in ways designed to make it easier for you to use the recipes you find online. These appliances can automatically preheat and adjust for temperature changes that a Yummly recipe calls for and even walk you through the recipe using a color touchscreen.

The Yummly app offers a lot of cool features like personalized recipe recommendations, and now it can send the cooking instructions right to your range! This integration makes following recipes so much easier.

These smart cooking models are compatible with:

You can tell your oven what to do without getting up from your chair! Plus Whirlpool's smartphone app allows you to preheat the oven or adjust its temperature with your smartphone. A proximity sensor built into the touchscreen adjusts the size of the screen's text based on how far away from it you are so you won't have to squint to see the next step in a recipe!

For more details, you might want to check out the Whirlpool WOS51EC0HS smart single wall oven as an example of what you can expect from Whirlpool's smart appliances. Whirlpool also owns KitchenAid, and has been doing some interesting things with the KitchenAid brand as well. The new KitchenAid Smart Oven+ wall oven offers powered attachments for grilling and steaming, and a baking stone. Check out the KitchenAid KOSE900HSS in person if you can! 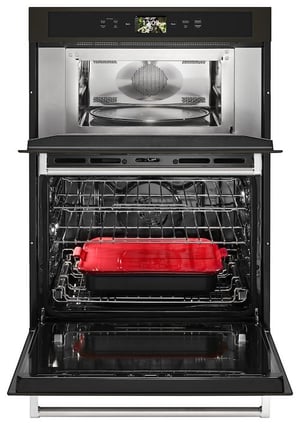 Whirlpool's initial smart refrigerator concept for 2019 incorporated a small touchscreen above the water dispenser that could do things like reorder items through Amazon Dash integration, set timers for marinating meat, and other features. However, these models have disappeared off of the market as Whirlpool focuses on smart laundry, cooking, and dishwasher appliances. It will be interesting to see if they begin offering a new set of smart fridges later in 2020!

Combination washer dryer units are rare but not unheard of from brands like LG and Kenmore. Starting at $1,700 MSRP, the Smart All-In-One Whirlpool WFC8090GX is a compact front-load washer and ventless electric dryer with smart appliance integration with the Apple Watch, Google Home, and Amazon Alexa, and you can control it from your smartphone as well. You can check the status of a wash or dry cycle, start or pause a cycle, and more even if you're not at home. Whirlpool also simplified voice commands to their Smart Laundry line for use with Google Assistant and Amazon Alexa. The touch controls are integrated into the door. 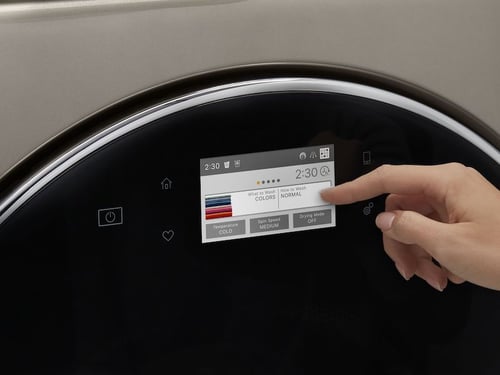 The Smart Laundry line also includes top load and front load washers and dryers (gas and electric) with touch screens that adapt to your most-used cycles and suggests customized presets based on your routines. Starting at $1,399, these models have a lot to offer. The front load washers all come with a Load and Go XL bulk detergent dispenser and are nicely sized models at 5.0 cubic feet. Most of the smart laundry options are front load models but there is a top load washer, electric dryer, and gas dryer available in the lineup.

If you want to spread out the task of doing laundry, select models in this lineup allow you to assign laundry tasks to other people in your household - so they can receive an alert to transfer a load to the dryer or to fold a load when the drying cycle is complete.

Using the Whirlpool app, you can start a cycle remotely, download custom cycles, and more. You can also control your dishwasher with your voice via Google Assistant or Amazon Alexa. You can also use Amazon Dash Replenishment to automatically reorder detergent when you're running low!

What's Up With the Whirlpool App?

Lots of appliance brands have apps for controlling smart appliances and providing a connected home experience. If you're doing your research, you might be looking at the Whirlpool app on the Google Play Store and the Apple Store. Unfortunately, on both platforms, the app has two stars or less as of this writing. However, one factor to consider is that people who have bad experiences are much more likely to leave reviews than people who had a neutral or good experience.

On the Google Play Store, we can see about how many times the app has been installed on a device. When we first looked into this in April 2019, there were 196 reviews and over 10,000 downloads - so less than 2% of people who downloaded the Android version of the app had actually left reviews for it. This has increased to almost 400 reviews and over 50,000 downloads as of January 2020, and the app's rating remains at 2.0 stars.

When it comes to wifi connected appliances, there are many small technical issues that can impact the appliances and the apps used to control them. Based on the first few pages of reviews, the main problem is connection issues between the appliance, the app, and the wifi network. Still, this is a very small sample size - thousands of people had experiences that were not awful or amazing enough to warrant leaving a review.

The LG Smart ThinQ app, which was released in 2015 like the Whirlpool app, has over 5,000,000 downloads on the Google Play Store and about 58,000 reviews (which means, like the Whirlpool app, a very small percentage of people who installed the app left reviews). When we first looked into this in April 2019, LG had a 3.6 star rating, but over 40% of those reviews were one or two stars. This ratio shrank over time to about 33% 1-2 star reviews in September 2019, and as of January 2020 the overall rating is now 4.3 stars and the vast majority of reviews are 4-5 stars. It's also possible that LG has a better system for prompting users to leave reviews.

All this is to say, we can't completely dismiss the Whirlpool app based on the reviews alone. The 99% of people who downloaded the app did not have a powerfully positive or negative experience significant enough to leave a review. It's possible that some of them installed the app and didn't use it - but it seems reasonable to expect that most people who buy smart appliances want to use the smart features! We hope as Whirlpool connected appliances become more popular, we'll see the reviews balance out.

It can be hard to find details on Whirlpool connected appliances since many of them are relatively new and information is limited! We expect that more information will become available as the manufacturer continues to release new, upgraded models. We're definitely excited to see these new features and options.

What do you think of these new features in Whirlpool connected appliances? Leave us a comment below - We'd love to hear from you!

Editor's Note: This blog was originally written in October of 2018 and has been completely revamped and updated for accuracy as of the publication date noted above.